10 most beautiful places to visit in Germany

10 most beautiful places to visit in Germany, Image: DreamsTime

When we think of the most beautiful in Germany, we may do it in the big cities. The Berlin Wall, the majesty of past armies, the origin of the conflicts of the twentieth century, etc. comes to mind. However, the European country is much more than that and in some areas, it still has a characteristic medieval atmosphere that will delight the most nostalgic travelers.

Discover the most beautiful places in Germany to stroll, savor and, above all, enjoy environments that seem straight out of the fourteenth century. We leave you this list with the 10 most charming German villages. 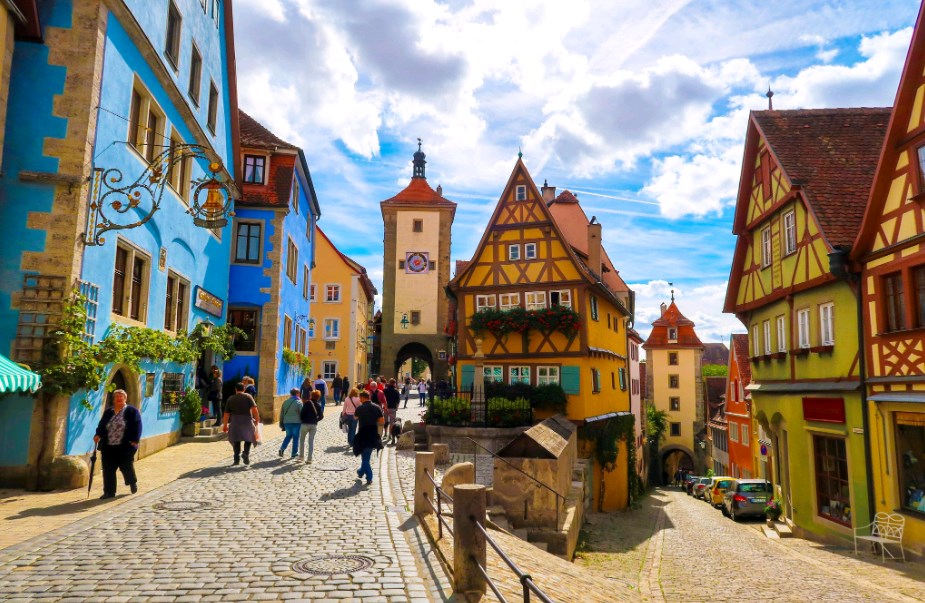 If we talk about charming villages in Germany we must start with this one, located in the mythical State of Bavaria and, specifically, in the district of Ansbach. It is one of the many medieval towns that still survive in the area and this makes walking through its winding streets a spectacle for the senses. Thanks to its extraordinary characteristics, it has already won the title as one of the most famous German corners in the world.

And, if we stop to walk through it, we can see that it really has everything to be part of the most beautiful villages in Europe. In addition, it is one of the icons of the well-known Romantic Road with its great walls, narrow streets of the Middle Ages, the towers, forts in which to evoke stories of knights and rustic houses that stand out for their painted wooden ornaments. The cleanliness and calm that is breathed here will end up making you fall in love with this fairytale enclave.

Bacharach (Fairy tale), a beautiful place to visit in Germany

Another of the places to see in Germany if we want to continue traveling as in an authentic fairy tale is Bacharach. They call attention to its characteristic half-timbered houses, as well as its towers finished in a Gothic style that highlights that strong medieval essence that it boasts. Not surprisingly, we can enjoy authentic ruins of medieval chapels, perfect for those in love with history.

It is also striking that the town has its own castle. This emerges from wine crops, which we must not fail to prove if we decided to include it in our route. Its location on the banks of the Rhine River makes this one of the best landscapes in Germany. In fact, the area in which it is located is considered a World Heritage Site.

Cochem, a beautiful place to visit in Germany

There are landscapes that earn much more with a river in the background and this one, in particular, is one of them. The town of Cochem is situated on the banks of the romantic Moselle river, turning all the surroundings into a real postcard landscape. Considered one of the most beautiful places in Europe, the town is guarded by its own castle, that of Reichsburg.

In general, the picturesque and colorful houses with irregular roofs stand out, and they carry all the essence of this beautiful town. It is worth taking a leisurely stroll through the vast valley and stopping to admire the imposing vineyards in the area. There are few tourists who decide to take a trip to Cochem every year to taste one of the best wines in Germany. A trick is to go to the Mosel festival, which takes place in late summer, to enjoy one of the most beautiful villages in Germany in all its splendor.

Schiltach, a beautiful place to visit in Germany

The Black Forest is another one of those areas to visit in Germany and that captures the attention of the most restless travelers. Right here is where we find this hidden treasure that is Schiltach. Sometimes it is cataloged as one of the most unknown German villages. However, it does not lack the charm that surrounds the rest.

It crosses the rivers Schiltach and Kinzig, which makes it one of the places in Germany to visit if you are a lover of the ability of water to raise the benefits of a typical postcard town. It is a delight to walk through its old town and admire its beautiful houses built and decorated with authentic wooden frames of the 16th century. In winter, snow is the queen and lady of the roofs of this medieval town, another addition to not hesitate to make a stop. 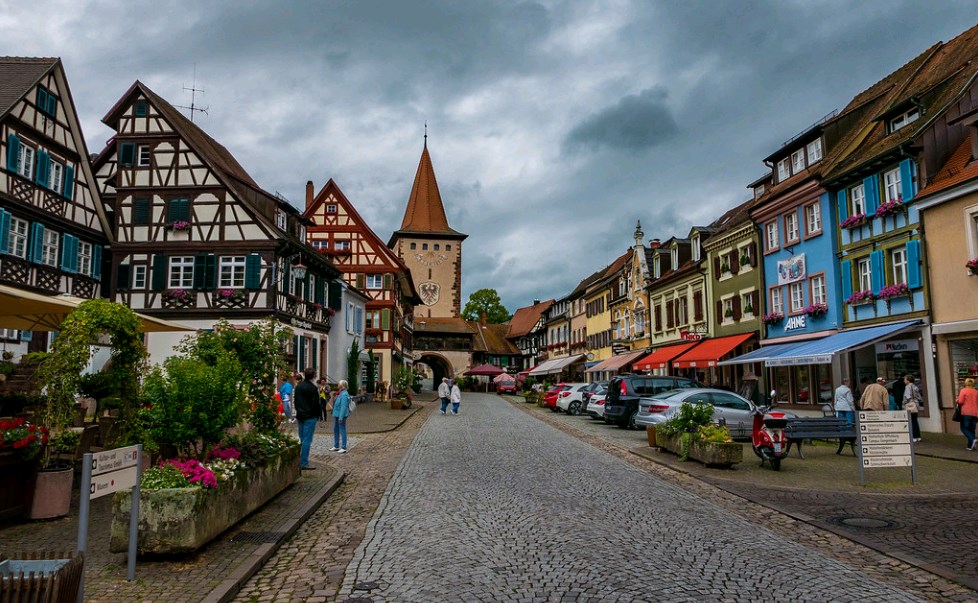 Gengenbach, a beautiful place to visit in Germany

If we make a route through Germany, also in the Black Forest and less than an hour from Schiltach we find Gengenbach. This has the characteristic of being a much less unknown town since many tourists meet at the place to enjoy the charm of these enclaves located in southern Germany. In addition, it has the virtue of being bigger, so more people are not a problem.

As a curiosity for moviegoers, this is where the exterior scenes of the movie “Charlie and the Chocolate Factory” were filmed. This has caused tourism to shoot. As a tip, a good time to enjoy this corner of Germany to the fullest is in summer, as it is a joyful time when wooden balconies are filled with beautiful flowers, giving their streets a life of their own. Do not forget to walk without worries through the romantic streets that the old town has. Without a doubt, you will want to repeat this excursion to one of the most beautiful places in Europe.

One of the most beautiful villages in Germany is Füssen

One of the most beautiful villages in Germany is Füssen. This, in addition, is responsible for announcing to travelers that the German Romantic Road is about to end. It stands out for its High Castle which, although it was built to serve as a summer residence for the archbishops of Augsburg, is currently in charge of safeguarding the impressive Bavarian Painting Museum between its walls.

In this beautiful enclave, we can also enjoy other places such as the Benedictine Abbey or the Spitalkirche Church, where you can admire authentic 18th-century wall paintings. Undoubtedly, one of the monuments that attract the most attention and that make it one of the most beautiful villages in Bavaria is the eclectic Neuschwanstein Castle, located to the southeast and which is a mandatory stop for any traveler in the area. 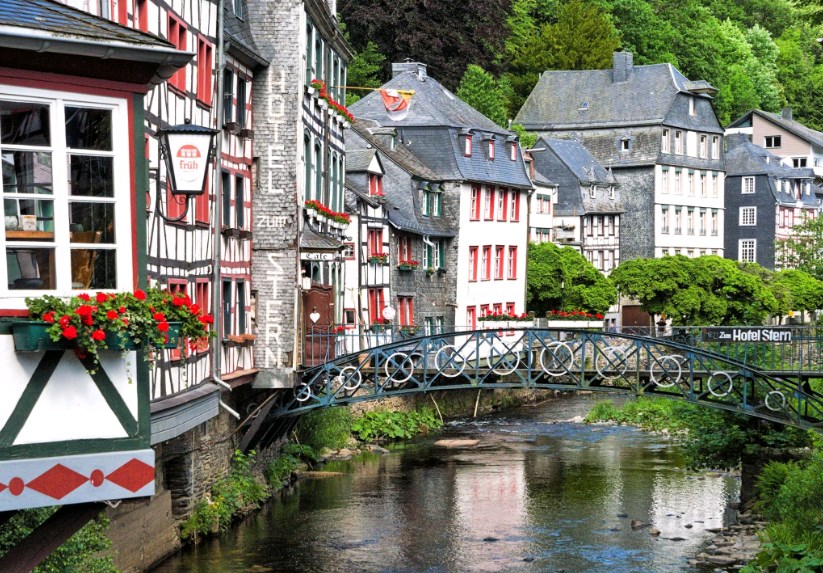 Monschau, a beautiful place to visit in Germany

Monschau is one of those German villages where it seems that time stopped many years ago. Hidden in the Eifel natural park, located in the Rhur River valley, we find this beautiful enclave that is located in the Aachen district, in North Rhine-Westphalia. It is curious that there are only two kilometers that separate it from Belgium, since this makes it an obligatory visit if we are, for example, in Brussels.

What most attracts the attention of this picturesque town, in addition to its classic elements such as the water mill, is the bucolic landscape that makes up its characteristic houses made of brick and wood and that follow the course of the river, winding with it too along with big trees. This medieval charm makes it one of the most beautiful places in Germany, so an excursion deserves, and much, worth it.

Dinkelsbühl, a beautiful place to visit in Germany

A survivor This is what we can say Dinkelsbühl is. It is striking for being one of the best-preserved medieval villages in Germany after having survived the two World Wars that happened in the last century. Therefore, this town, in addition to a wide visit, deserves all our respect.

Not surprisingly, it is one of the most claimed attractions of the well-known German Romantic Road. Here we will find buildings that give it that air of being one of the oldest villages in Germany; four artillery towers that we can admire; and beautiful cobbled streets to walk along alone or well accompanied. It is known as the “fortified medieval city.”

Schwäbisch Hall, a beautiful place to visit in Germany

There are many medieval towns in Germany and this is another one of them. But not for that reason it is less important or enjoys less charm than the rest. Although it is not a place where there are too many attractions designed for tourists, that is precisely what attracts attention here. It is the perfect place to disconnect, walk and calmly enjoy that peace and tranquility that it offers at all times.

We cannot miss the Unterwöhrd park area. This is made up of a group of islands that connect to each other through beautiful wooden bridges through the Kocher River. And if we should highlight something that attracts attention in this place, it is the amount of romantic wooden bridges through which to cross the river while enjoying, for example, ice cream on hot summer days. Without a doubt, a good plan to enjoy the best landscapes in Germany. 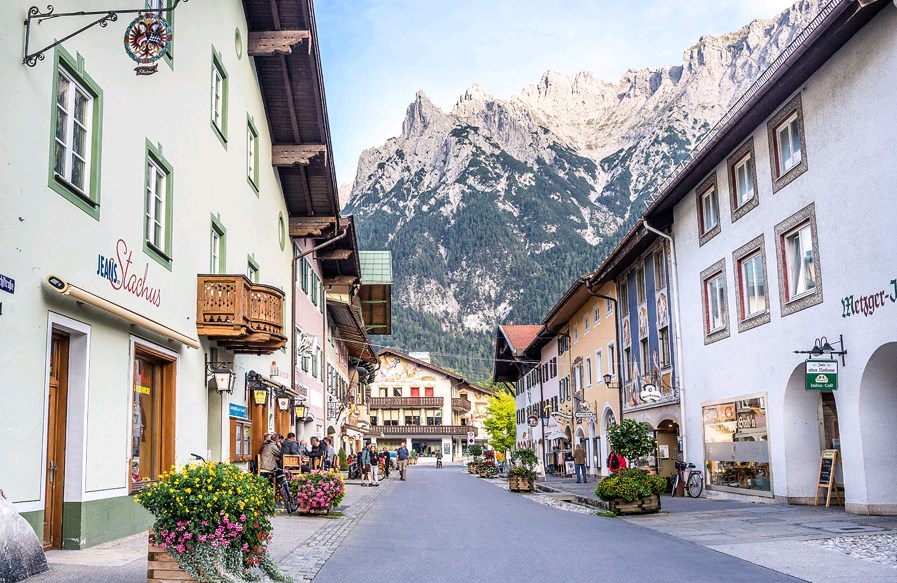 At the beginning of the Alps and very close to the Austrian border, we find Mittenwald, a beautiful mountain village in which it seems that every detail has been perfectly taken care of. If we talk about ancient villages in Germany, it also stands out, as it is considered the oldest in Bavaria. This makes it still intact all those medieval charms for which it has undoubtedly become so famous.

If you are in love with art, this is your place, because you breathe in the streets, in its people and in all the stringed instruments for which this enclave is famous. We talk about violins, violas, etc., which give their corners a special air that smells like music in every corner. Not surprisingly, it is known worldwide for the quality with which these types of specific instruments are built here.

The 15 most important Monuments of Rome, Italy

10 Most Visited Cities in Latin America

The 10 Best Beaches In The Caribbean

The 15 best beaches in Brazil

The 10 best beaches in Colombia